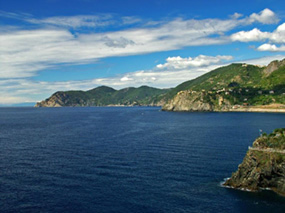 « Sit the noon out, pale and lost in thought
beside a blistering garden wall,
hear, among the thorns and brambles,
snakes fllstle, blackbirds catcall.... »

So, years ago, Eugenio Montale wrote about the beauty of Cinque Terre, next to a magnificent nature, where you can explore the hard work done by the man over the centuries.

Cinque Terre, is a little group of five seaside villages in the picturesque Italian Riviera Coastline. Monterosso, Vernazza, Corniglia, Manarola and Riomaggiore they are an incredible fusion of history and culture. The inhabitants during the centuries, they were able to shape an hostile territory like this one, building thousands of dry stone walls from the summit of the hills, and creating in this way the famous terraced hills also known as "fasce" in the Ligurian dialect, that descend toward the sea.

The nature in harmony with the man has been able to create a unique landscape in the world.

The coast sheer drop to the sea, with paradisiacal bays, dreamy beaches, and crystal blue water, combined with villages of medieval origin and cultural heritage, are some of the distinctive traits that you can find in Cinque Terre. In this strip of land on the Italian Riviera coastline also known in Italian as the "Riviera Ligure di Levante", during the time, they succeed to preserve the natural and cultural values.

Cinque Terre is especially known for its hiking trails, like the Via dell'Amore and the Sentiero Azzurro, that are among the most beautiful that you can find in Italy, Europe and in the world.

Undoubtedly walk in the paths is the best way to discover the five villages, enjoy the stunning views, and take some lovely picture to show to your friends and family when you are back home.

Useful resources to Travel to the Cinque Terre 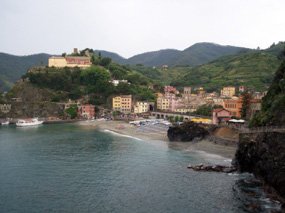 Monterosso is the most northern village of the Cinque Terre and the only one with a sandy beach.

The town is split in two by a rock, with a castle on top of it. We were afraid to get into a commercial centre, but the small village could seduce us somehow. A lot of small shops and restaurants in the narrow alleys provide it a pleasant atmosphere. The village is divided into two parts from San Cristoforo hill and the old part of the village.

Monterosso has the best beaches of the Cinque Terre villages and the most wine shops, artisan shops, hotels and restaurants. Monterosso Travel Guide 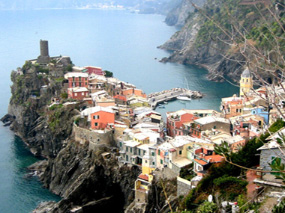 Vernazza is one the most touristically developped village. The main street, full of shops, is quite crowded.

The village has a natural pier with a amphitheatre shape making it perhaps the most picturesque village of the Cinque Terre. Vernazza was a Roman installation and had a big strategical importance during the age of the Maritime Republics in Genoa. It was also famous for its carpenters.

The small natural harbour lies protected inside a rock wall. It is dominated by the Doria castle, lying at the top of a cliff. Vernazza Travel Guide

Corniglia lies high on a cliff above the coast. It is the only of the 5 villages that does not have an harbour.

This village stands sharply out from the others in Cinque Terre. As a matter of fact it has a marked agricultural vocation and is classified as a rural village instead of a maritime one. It is situated on a hundred-metre high promontory sheer above the sea, and it is surrounded on the three internal sides by terraced vineyards.

The old centre has only one street, that leads up to end of the cliff, overlooking the Cinque Terre coast. Corniglia Travel Guide 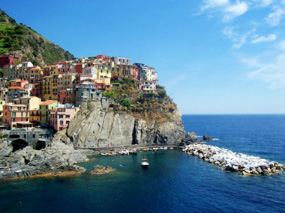 From the station, a long tunnel leads into the main street, the Via di Mezzo. Going up to the right, leads to the church.

Manarola is older than Riomaggiore (beginning of the 13th century). The village is surrounded by vines and is situated along a stream. The wine of Manarola is very famous and the "Via dell'Amore" starts here: an easy to walk, paved path a distance of two kilometres, connecting Manarola to Riomaggiore.

Since 1997 you can admire in Manarola a giant nativity scene during the Christmas period. Manarola Travel Guide 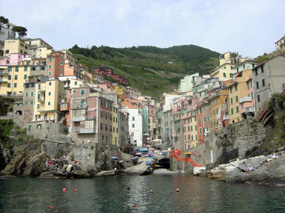 Riomaggiore is the first of the five villages, coming from La Spezia. It is located at the bottom of a narrow valley.

Above the houses, the hills are terraced. Some of them are still used to cultivate grapes and olives. The two churches in the higher part of the village are worth a visit : the Chiesa dell'Assunta and the Chiesa San Giovanni Battista. Sunsets areas, which goes from Portovenere to Riomaggiore, has been made into Cinque Terre National Park.

The first historical accounts about this village date back to approximately seven centuries ago. Riomaggiore Travel Guide